Building a BDR Team: Our new BDR is "afraid of the phone" 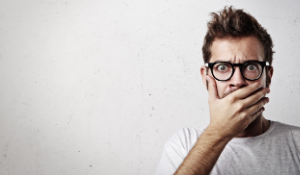 When building your BDR team, especially if you’re hiring right out of college, it’s common for a few new hires to come in and be reluctant - or downright petrified - of making cold calls.

This can be a major surprise as a manager. The rep had a great cover letter, solid resume, nailed the interview but they look at the phone as if it were a hot stovetop. Whole mornings go by without making a dial.

What do you do in this situation? Is "cold call reluctance" coachable? How can you tell if this is normal new hire jitters vs. maybe the BDR role isn't the right job fit for the individual? Is there a way to prepare for this in your recruiting/hiring efforts? Screen for this type of cold calling stage fright?

Over the next few blog posts, we’ll dive deeper into these questions, looking at things from a recruiting, training, and personal development level. In today’s post specifically, we’ll spend some time identifying the fear itself.

What’s the main source of the fear?

Yep. That one still hurts…

You see this all the time in college or the NFL, especially during the playoffs. A kicker will be great in practice, perfect in low pressure kicks, but when the game is on the line, and the other team ices them, something happens. A kick they’ve made hundreds of times goes terribly wrong.

This also happens in cold calling. A rep might be confident if they have a conference room to themselves or they’re making calls from home. These are like the low-pressure field goal kicks. But when they’re at their desk, where everyone else on the team can overhear, it’s like icing the kicker. There’s this new fear of potential embarrassment/messing up in front of their colleagues that BDRs overcome or, sometimes, aren't able to get over.

If a rep is afraid of making cold calls at home or in a conference room and the fear stems from not wanting to be hung up on or receive a negative response, that’s a really hard situation to help the rep overcome as their manager. The BDR job just might not be the right fit for them. And that’s okay, they'll be happier in a different role.

But if the rep does well in a call booth, conference room, or at home and the fear stems more from making calls “out on the floor,” this is a different scenario. It’s like having a kicker who makes 50-yard field goals in practice but tenses up during the game. The skillset is there, the drive is there, you just have to work with them to knock out some of the stage fright. With more practice, more repetition, we've seen plenty of times here at SEG where BDRs grow more and more confident and ultimately want to take that game-winning field goal.

The next post in our series, we’ll share how you can start building an environment where reps not only become more confident and stronger on the phone, but they begin to grow as leaders, empowering your future BDR hires.